And then Gene finally decides to build the bass he's always wanted rather than try to modify production models or order custom instruments. In 1991 he began talks with B.C. Rich about producing an instrument of his design, possibly at the behest of Paul who had been playing his beloved Eagles (and a few other models) since 1983. First off the drawing-board seems to have been the prototype that was auctioned off in 2001 (see below). Apart from the obvious difference in the horns this bass also featured a shorter scale. The auction catalog managed to suggest a 1995 date for this prototype which is off by only about 4 years. (More on this later on.)

Production numbers and most technical details in this section comes courtsey of B.C. Rich collector Dude With Stuff.

The second Punisher design turns up in the 1992 B.C. Rich catalog and some related advertisements but it doesn't really look like the Punisher we know. These were supposed to be the production models and they had a bolt-on neck, pointy headstock, a single humbucker and a "money bag" inlay pattern. However, I'm inclined to believe that only one bass in this configuration was ever built. All known photos (one or possibly two photo shoots and the pic of the instrument itself in the catalog which was also used in ads) are of the same instrument with the exact same signature dated "Dec. '91". One of ads of the day that features the second prototype (the "Gene Simmons blew his mind..." ad) notes that the Revenge album is out which means that it was in print by May of 1992.  Although the dating of the various ads is unknown I'm inclined to believe that the picture-less, albeit highly optimistic, ad to the right here replaced the earlier ads while the production model was re-made according to Gene's altered specs. Having a production instrument that didn't match Gene's stage instrument would surely have been a recipe for financial disaster. This would also go some way towards explaining the Punisher's abscence from the Unholy video and the short UK tour in May. 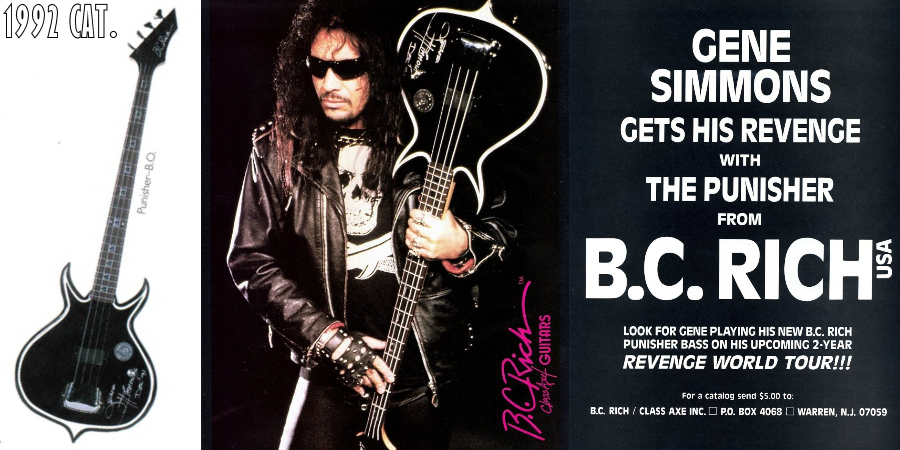 At least one Punisher made the trip to the UK in May of 1992. The one that would become his #1 for the beginning of the Revenge tour was a "standard" Punisher with black paint job and outline "pinstriping" in white both on the body and the headstock. The pickup configuration is a P-style and a J-style EMG. Curiously enough considering the pickups the controls are limited to a single volume knob (which was the case for all the Punishers Gene played during this time). A mirror skull pickguard completes the look. Pics below show this bass from the Revenge tour and the video clips come from the I just wanna video and opening night in Allentown 92.10.01.

In 1991-1992 the B.C. Rich custom shop produced 19 Punishers. Serial numbers for this run were 01 through 19 which isn't the way B.C. Rich usually numbers guitars. Gene had his pick of this first run.

Look closely and you can have the distinct pleasure of seeing Paul play this bass in the video for Domino.

The second Punisher was a mirror-faced one with a single P-bass pickup and a single volume knob. The headstock on this bass lacks the white pinstripe outline. Upon close inspection the mirror face is confined to the inside of the white pinstripe outline of the body. It makes its debut onstage in Philadelphia 92.10.10 (see video on the left below). For the first month of the tour these two mirrored beasts carry the load. (This bass was also featured in the photo shoot with Anthrax for the August 1993 issue of GFTPM.)

The basses that Gene actually played were made by the B.C. Rich custom shop and were neck-through builds with varying pickup configurations. Since they were custom jobs headstock shapes and logo could differ, and quite possibly did on the others made during the time, but all of Gene's Punishers from the time had the classic 2-tuners-a-side headstock and script logo. Judging by photo and video evidence Gene had 3 B.C. Rich Punishers that he used for the Revenge tour (and a few more years after that while he set up shop for himself). 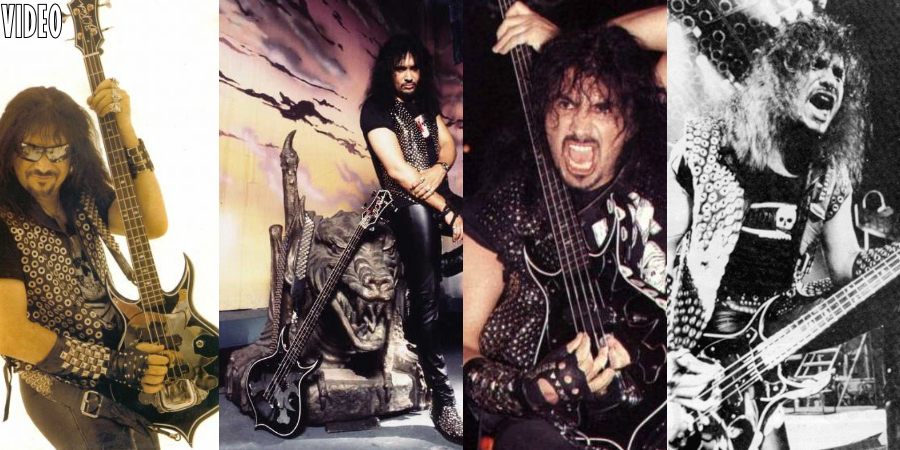 Pics of Gene using the Punisher in front of Leon all seem to come from the stint in Australia in 1995. 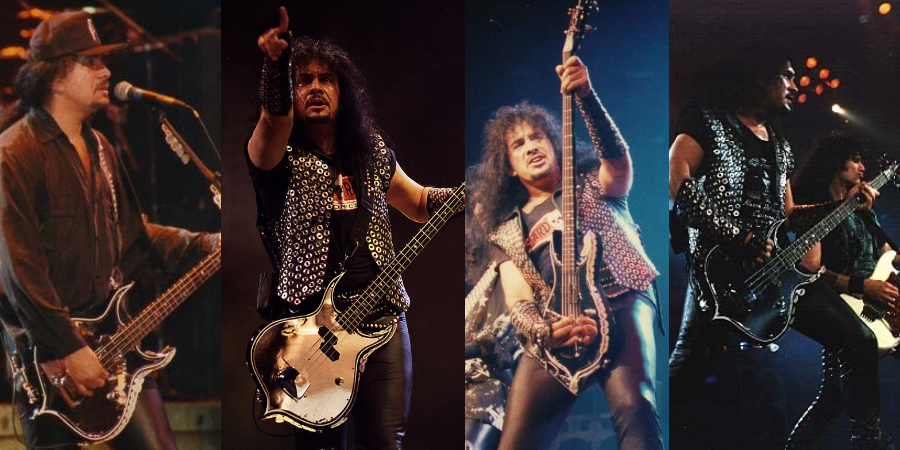 Dated pics of this era are a little hard to come by and many of the video bootlegs of the day leave a little to be desired quality-wise. Dating for this entire section is therefore a little shaky.

By the time we get to St. Louis 92.11.13 the flame Punisher makes its entrance. The video source from this show is quite frankly abysmal (the audio is OK) so the clip below comes from Grand Rapids two days later. This bass also features a single P-bass pickup and a volume control. No frills whatsoever. 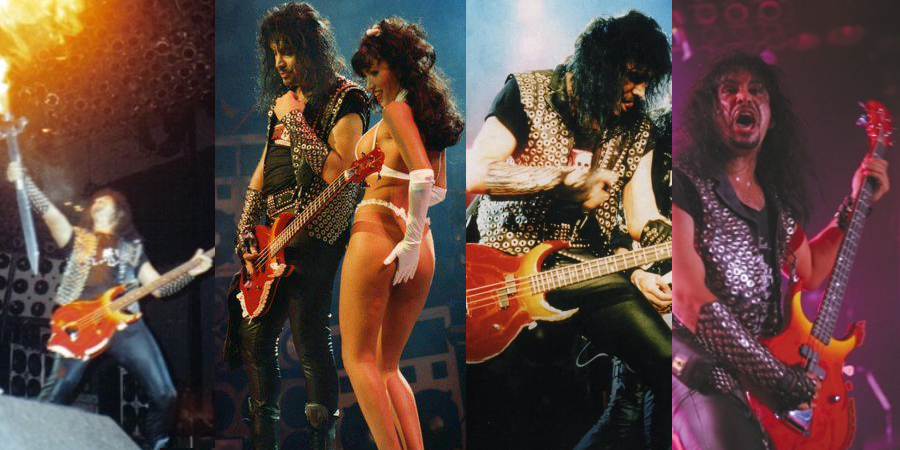 The fact that Gene's trademarked "money bags" logo was used for the inlays is mentioned in the Australian fanzine Oh Yeah!'s 5th issue (spring 1992). It seems to have been an afterthought on the prototype since the 12th fret inlay is the money bag flanked by two regular dot inlays. It's unclear whether the chrome "silver dollar" on the body is an inlay or a sticker.

The production model Punisher had a bolt-on neck with a pointy headstock. Should you come across a B.C. Rich Punisher with a bolt-on neck that has a classic 2-a-side headstock then it's not original. (Same goes for any Punisher with binding on the neck; those are all replicas built by Ed Roman.) The ones I've seen pictured all have the P- and J-bass pickup combination with a tone, a volume and a three-way switch (quite apart from Gene's Punisher at the time). These were made for a relatively short period of time in 1992 and 1993 and estimated total is less than 150.

1990-1993 Class Axe licensed the B.C. Rich name and by all accounts managed to drive quality into the ground to the point where Bernie Rico tried to regain control of the company. This was probably part of the reason that Gene chose to end their collaboration in late 1993 and the root of this quote from the July 1996 issue of Bass Player: "For a while, they [the Punishers] were made  by B.C. Rich; the company made only five of them before I decided to do it myself. I wanted to use certain woods and the best hardware and electronics - Schaller tuning pegs and EMG pickups."

The 5 basses Gene refers to are probably the custom shop ones that he personally got. Production totals, as noted above, were definitely higher.

Although Gene severed ties with B.C. Rich he continued using the Punishers they made (using the flame one for the Burbank show on 93.09.11 and the Dick Clark taping on 93.12.12) and even debuted a 4th one in 1993. It first appears for the Aresnio Hall taping on 93.05.20 where we see a Punisher which features P- and J-pickups, a single volume knob (although the pics below seem to suggest a second knob may have been removed) and a pinstriped headstock. This bass also shows up when KISS back up Garth Brooks on the Tonight Show on 93.07.13 but the camera naturally focuses on Garth and the best view of Gene's bass is actually only the headstock which clearly shows the script B.C. Rich logo. This bass also shows up for several shows during the South American tour of 1994 as seen below. 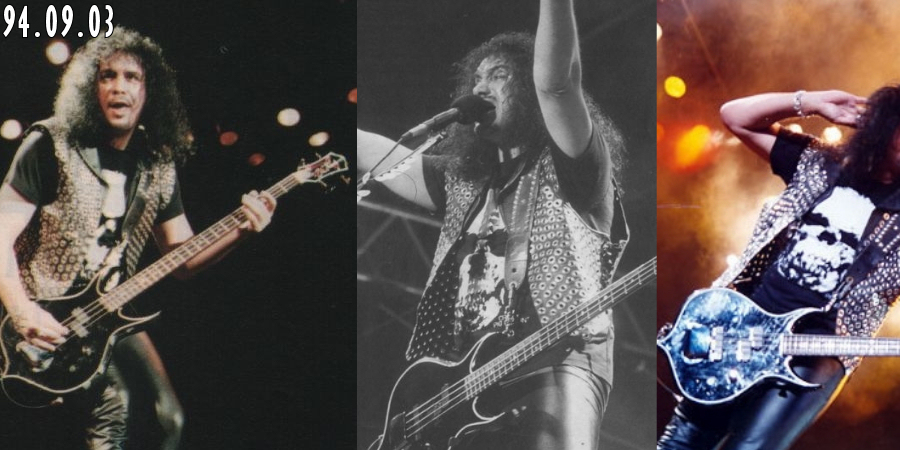 Only one B.C. Rich Punisher makes the Convention trip in 1995 that I've been able to find, the mirror front one from the Revenge tour. It's correctly dated but not identified as a B.C. Rich (the headstock is perfectly clear on the matter though). And, excepting the prototype only the flame Punisher is part of the auction. In a rather curious turn of events it is correctly identified and described but the photo of it shows that the B.C. Rich logo has been clumsily covered with pink. 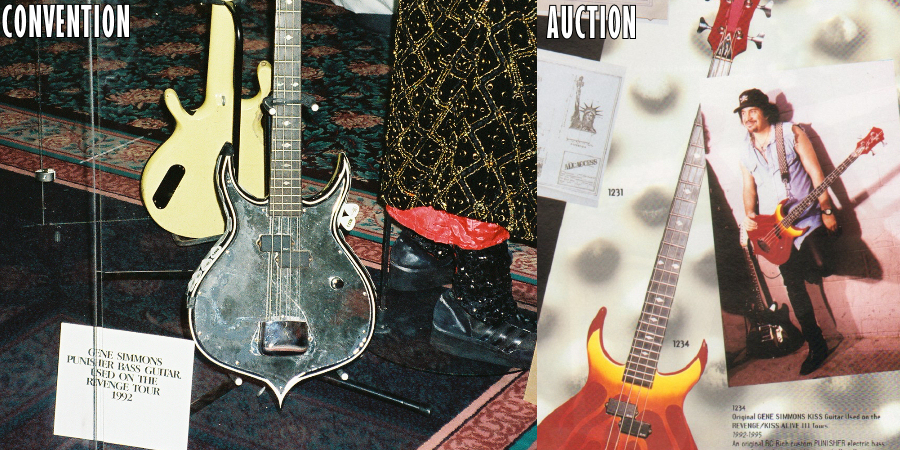 Only one Punisher actually left the B.C. Rich custom shop with a flame finish (this one), all others are refinished. Like this amazing work by Style-S Guitars.

The auction entries (Butterfields in 2000 and Lelands in 2002) for the prototype Punisher at the top of the page are some of the more laughable in documents filled with inaccuracies. First of all, calling it "an original prototype for the GENE SIMMONS PUNISHER bass guitar [sic.]" while identifying it as a B.C. Rich and giving it a date of 1995. We know that Gene severed ties with B.C. Rich probably as early as 1993, early 1994 at the latest. As a matter of fact, 1995 was the years that saw the release of the massive tome KISSTORY which arrived with a promotional brochure for Gene Simmons Punisher which he was then selling for himself. (The brochure listed the well-known black Punisher and a natural wood version. Both cost $1500. By the time of the Reunion and the accompanying tour book the option of a tobacco sunburst had been added.) Second, the Leland's auction claims that it was used for the 1993 appearance on Arsenio Hall which is also untrue. The footage above is there for comparison.

Considering that Gene has played the Punisher in more or less the same configuration since he went into busniess for himself in 1995 it seems as if he finally go it right. "I have so many basses, but I always settle on the ones that have those certain elements I like. The Punisher is the culmination of all that I've learned and love about the bass." [*] But look closely at the pictures below, Gene never seems to play his Punishers stock, regardless of who has made them. Controls are reduced to a single volume knob just like on the original B.C. Riches. And, in a move that harkens back to 1975 and the modifications to the Gibson Grabber, the output jack has moved around through the years. 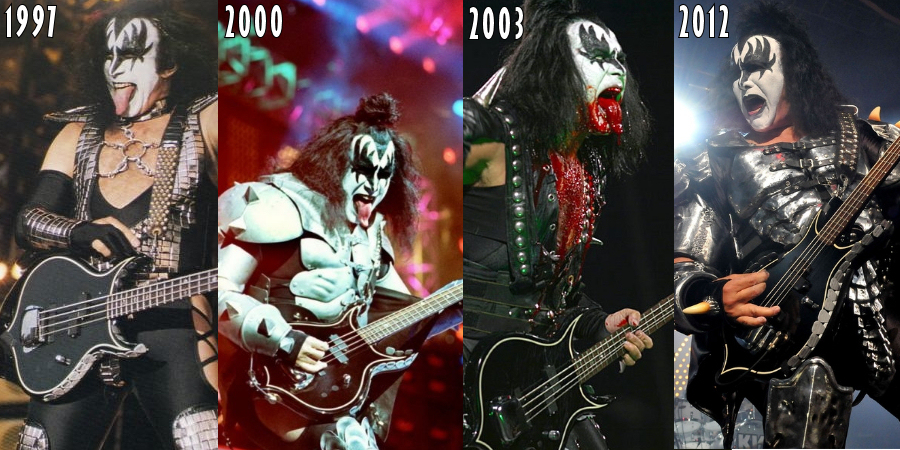