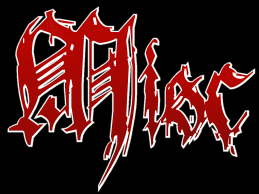 Throughout KISS' career Gene has experimented with a number of basses that never quite made it into the "regular rotation". Some were just basic backups for when his #1 bass had to be tuned, some were used for longer periods of time but disappeared unceremoniously.

Used as a backup bass in 1974, this is not the same P-bass mentioned in relation to Wicked Lester. This appears to be a completely stock black Fender P-bass. When I put together my first site devoted to the guitars of KISS I had seen all of two pictures of Gene with the P-bass and to be quite frank it didn't look quite right. That's why I thought it was a relief of sorts that it had been used for such a brief period of time. As can be seen below the verified dates of him playing it are very close together. So all was well and good, Gene didn't care for the P-bass and it was a failed experiment that didn't last. Alas...

The Dan Armstrong is a strange beast. Designed by Dan Armstrong for Ampeg in the late 60's it has a "plexiglass" body (actually a clear acrylic polymer but plexi sounds cooler) and was produced between 1969 and 1971. It is known for a single backstage instrument lineup from 1977, shot from two angles, and there is no evidence that it was ever used live. Chances are Gene tried this out because it had the same 30½" scale as his go-to LoBue.

From the looks of the bass it has been modified replacing the original wood pickguard with one that is more mirror-like (although it has a slight "tin fooil" look to it). There is also an obvious addition below the bridge although it's unclear what it actually is. It could be a cavity for extra electronics but it's anybody's guess. A standard Gene modification regarding the strap buttons have also been done. The original, and quite unwieldy, strap button has been replaced with a simple, sturdy screw-in loop (a standard move for Gene).

The Staccato bass is something quite interesting. They were cast using magnesium alloy and were built in Norfolk, England. The MG model which Gene played was introduced in 1985, which means that Gene was very quick on the draw in getting one, and it retained the cast magnesium neck but had a fiberglass body. The MG was also the first model from Staccato to move away from the concept of interchangeable necks and was built with a set neck. According to the Staccato web site the chrome-plated version with EMG pickups was a custom job for Gene. Note that this particular Staccato has two J-style pickups, what appears to be two control knobs, a front output jack, and the tuning mechanism at the bridge (which was the default for Staccato basses). The first sighting is in Providence 85.11.22 but it also makes a guest appearance in the high-brow concept promo for Uh! All Night.


Looking a little more image-compliant the same Staccato shows up in the promo for Crazy Nights in 1987. The video below is taken from the uncut reels of Gene closeups from the shoot (a mind-numbing watch should anyone care to track them down) and the twin J-pickups are clearly visible. This version also shows up in a few promo pictures from the day and there we clearly see the two control knobs,a mini switch and a front output jack. However, by the time the band were shooting the pics for the tour books this bass has been modified so that the "neck" pickup is switched for an EMG humbucker. (Notice what appears to be an extra frame around the pickup to cover the wider hole from the original J-style pickup and the lack of tuning pegs on the headstock.)

The Staccato that got to see action on the road looks like a different bass altogether and that is in fact what it is. This one has Gene's usual bridge cover which means that the tuning bridge is probably gone and in its stead we find tuning pegs on the headstock. There's also a single EMG humbucker, a single volume knob and a side output jack. This seems like too much work considering the fiberglass body (although it is of course perfectly possible) but the "damning" evidence are the 12th fret markers on the neck. Remember, the necks are no longer interchangeable on the MG model and the Asylum/CCN Staccato has three dots at the 12th fret while the touring bass only has two. 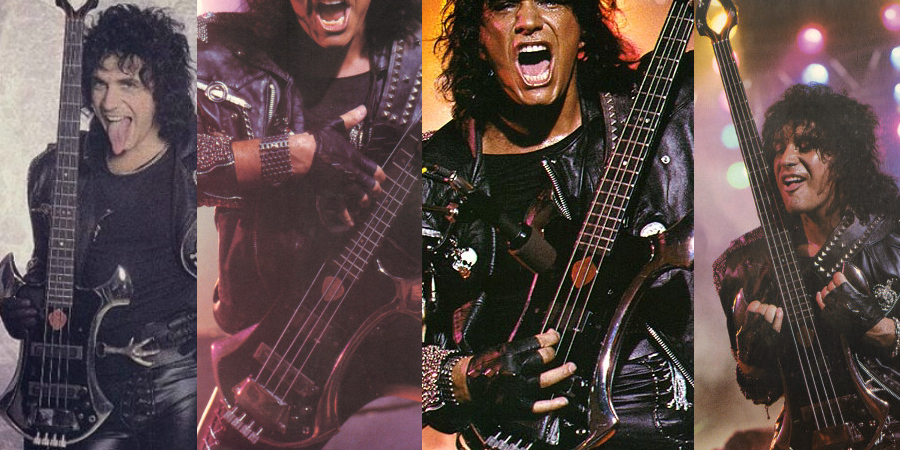 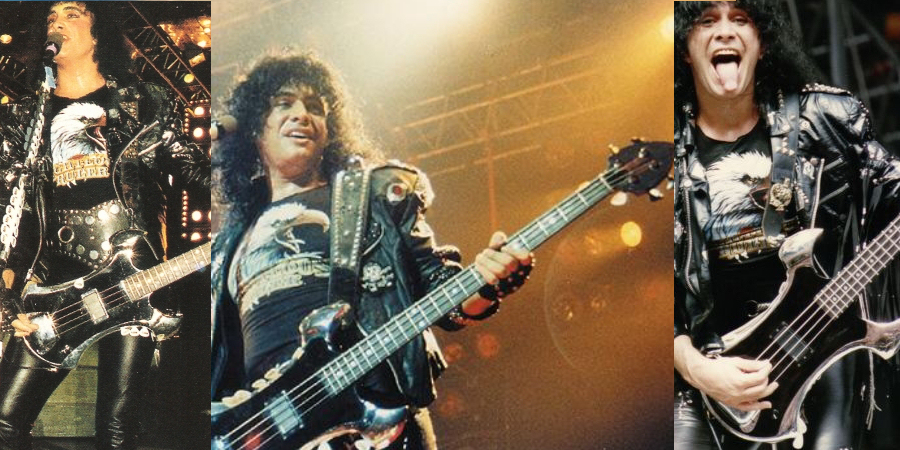 The Staccato falls out of favor after the Crazy Nights tour. With the image move towards a more rootsy, rock look (no more sequins, bike reflectors, or colorful spandex) it would probably have looked a little odd next to Paul and Bruce playing Les Pauls. It is briefly brought back for a single photo shoot during the Revenge era and gets to feature in an ad for GHS strings before disappearing from the scene. 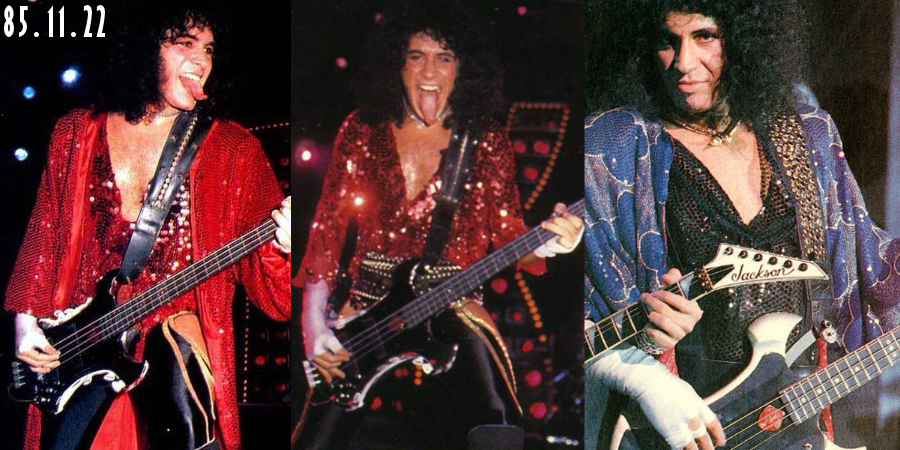 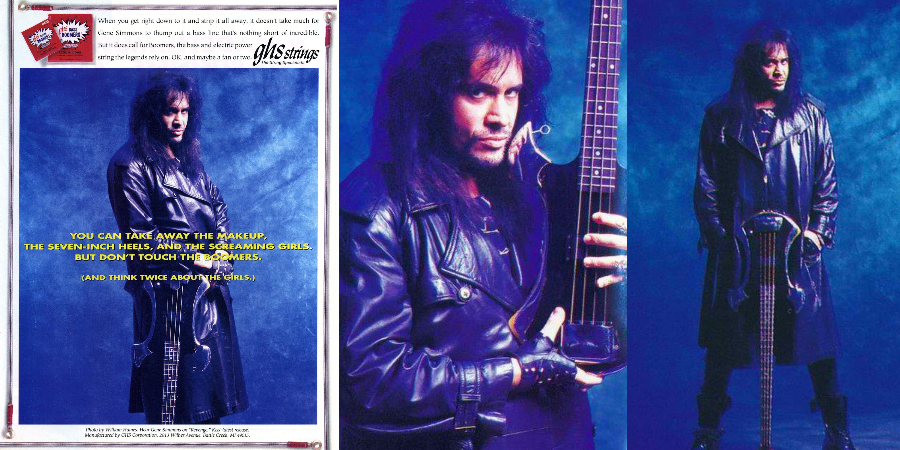 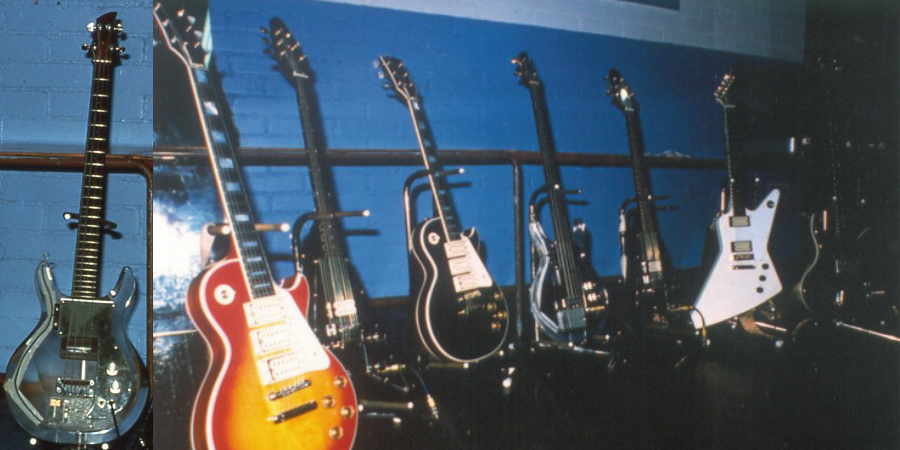 The most interesting thing about this P-bass, except that it's such a rare bird for Gene, is the fact that it has the bridge cover that would later become a staple on all of Gene's basses.

Like so many other of Gene's basses the whereabouts of the Staccatos are unknown.

As with all things related to Gene's instruments, there's always a twist and what better way to illustrate it than with another mystery. What is the bass with the hockey stick headstock and a Charvel logo that's standing behind the backline when KISS play Galveston on 90.03.11? There have been no, and I do mean absolutely zero, Charvel basses in Gene's arsenal that I've been able to find. This is the only picture (actually there are two but they differ very little) and it tells us nothing except that there is a Charvel bass backstage. Considering the lack of picture evidence I'm inclined to believe that the bass may have been the one used by the warmup act of the day. 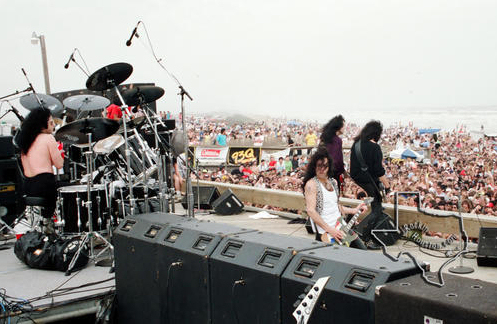 Note the location of the strap "screw-in loop" as favored by Gene in later years. This is a late addition that isn't seen in the Crazy Nights pics above.

Although I specifically mention the scarcity of pics concerning this bass there is at least one pic from opening night of the Can-Am tour, in Halifax, that shows what appears to be this bass standing off to the side of the stage.

When browsing through some pics (searching for something completely different) there it was. And it kept turning up. Standing off to the side on Gene's side of the stage was that black P-bass. The brief failed experiment suddenly turned into the perennial backup that was with Gene for almost a year, right up until the Gibson Grabber enters the picture. It first turns up at the famed Academy of Music show on 74.01.08. A little over a month later in Los Angeles, there it is again. April in Charlotte, NC; May in Long Beach, CA. It's there. In Atlanta on 74.06.22, the infamous "fainting gig", it can be seen standing next to Gene's Ampeg amp. And as late as 74.11.10 it's right there on the left side of the stage. 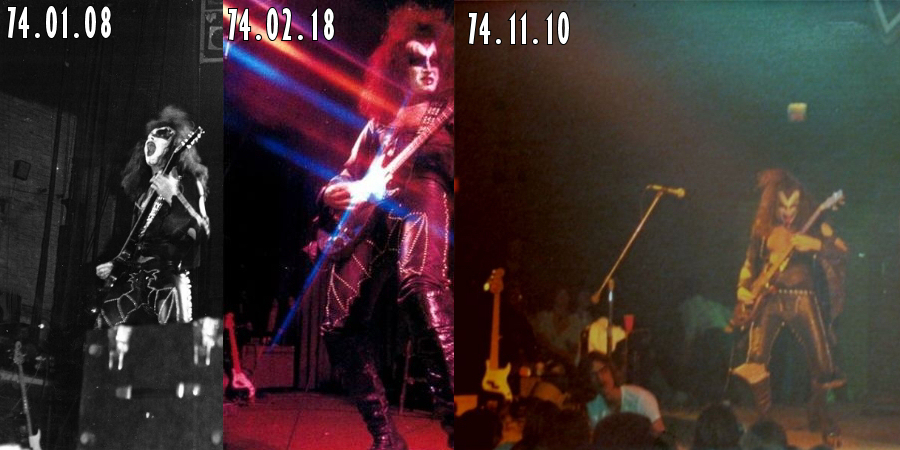 That's three different tours during a time when the magic of the KISS image was formed. Shudder to think if anything serious had happened to the custom LoBue in 1974, which is probably exactly what did occur in October when it disappears for a few shows - the P-bass might have been forced into the no. 1 slot and the entire image of KISS might have changed. One would hope that the classic "Gibson phase" would still have happened and derailed any P-bass inklings but you never know. Gene never stopped looking for that one bass and in a weird alternate universe, the P-bass might have been it...

I long held the hope that the fact that it was by the side of the stage meant that it was for the opening or headlining band rather than Gene but the Academy of Music show featured only KISS. 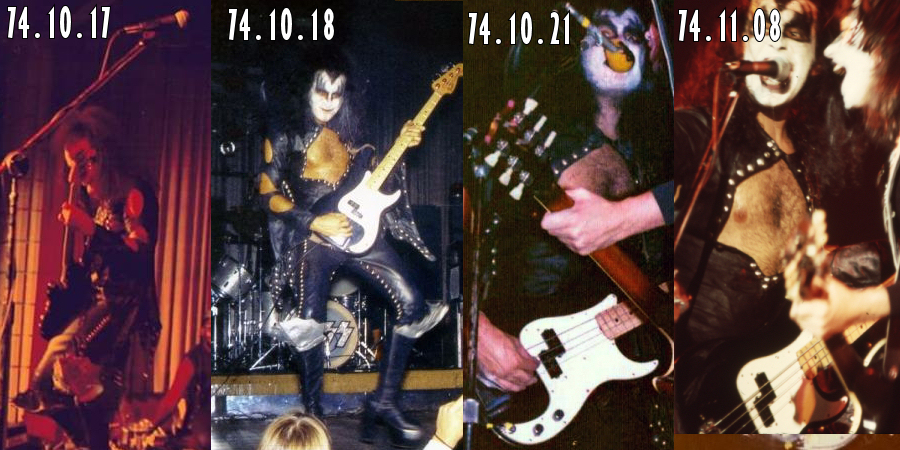